Enter your City name or Pincode

Angamaly has a unique distinction of being one of the fastest growing towns in Kerala, and is pegged to be another major economic hub near Kochi, and at the same time has retained a rich history and manifestations of culture and traditions. It has a diverse multicultural tradition of Hindus, Muslims, Christians and Buddhists. 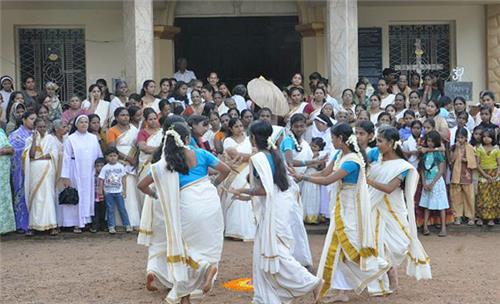 Angamaly has been a historical destination of Buddhist pilgrimage. It has 18 viharams in existence till date and was a major Buddhist stronghold once. These viharams could be identified easily as they have suffix ‘serry’ in their names.

Kallil Temple is a well-regarded Jain shrine established in the 9th century. This rock cut temple is built at an expense of 28 acres and can be reached by a short trekking of 120 steps to the shrine. Kalady, birthplace of Adi Sankara is close by and here lies his Sanskrit university.

Angamaly is deepened with strings of cultural and devotional centers in and around it. The town is enriched by the existence of many churches that has been witness to many meetings and events that molded the course of modern Christianity in Kerala and also subsequently in India.

St. George Syro-Malabar Catholic Basilica, which was originally built in AD 450, has been renovated and stands now as the biggest of its kind in India. In its antiquity, it was used in cooperation by both the Catholics and Jacobites till 1750. In this church there was a chapel. This chapel was dedicated to St. George, where both the Catholics and the Jacobites conducted their services in cordial manner. The most ancient University for Malpan traditional training was opened here, before the arrival of the Portuguese.

It is a strong belief that St. Thomas, the apostle of Jesus Christ, came to Angamaly and prayed here at what now is St. Thomas Syro-Malabar Catholic Church. This Christian pilgrimage centre has been honoured by the Vatican by designating it as an international shrine. There are confirmations for the churches in the area to have been constructed as early as AD 409 and AD 822. These churches have frescoes and other murals which are very well defined and provide historical insights.

International Film Festival of Angamaly has become a regular feature in this town since almost a decade. This film festival celebrates acclaimed films from all over the world, also including among them the best of Indian and Malayali cinema. Documentaries, Short Films, Animation Films are other categories in that one could look up to.

Onam, the state festival, is celebrated with pomp and glory in Angamaly. It is a ten-day festival and is majorly celebrated by Hindus. The festival marks the home coming of the King of Malayali people, King Mahabali.

Signifying the Malayali New Year, this festival is marked with making flower designs on the floor, popularly called the Pookalam. The grand Onam feast, called ‘sadya’ contains some ten different types of vegetables, served on a banana leaf. These vegetables are served in a proper order and are to be eaten in the same order. This is then followed by a mouth-watering dessert, ‘payassam’ which will utterly satisfy your taste buds.

Are you a Business Owner?

Add the products or services you offer